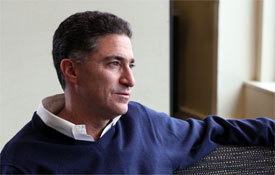 Russell Berusch is President of Berusch Development Partners LLC. For more than 20 years he has specialized in urban redevelopment projects that revitalize communities and university environments. Mr. Berusch pairs a passion for transforming neighborhoods with a proven ability to execute on projects that are innovative, complex, and catalytic. The results of his work can be seen in thriving retail, housing, and mixed-used developments across Greater Cleveland and in communities well beyond Ohio.

As both a consultant and developer, Mr. Berusch has played a critical role in projects collectively valued at $300 million. He is adept at working with a broad range of public and private partners to reimagine blighted or tired streetscapes; developing the detailed and strategic plans to turn vision into reality; and managing complicated developments. He has the skills to oversee the entire process or step in at any point to provide a range of services such as market research, structuring real estate deals, and securing non-conventional financing. He also is skilled at bringing residents, businesses and institutions into the process to optimize both the planning and the results.

Mr. Berusch formed Berusch Development Partners in 2006 to provide part-time consulting services. He moved to the company on a full-time basis in 2011.

He previously was vice president for commercial development at Case Western Reserve University, where he conceived of and oversaw the pre-construction phase of the Uptown project. This $150 million development of retail stores, apartments, cultural institutions, and landscaped open space opened its first phase in 2012.

Before joining CWRU, Mr. Berusch was senior vice president of real estate for Neighborhood Progress, Inc., where he led the nonprofit’s real estate development subsidiary for ten years. He worked with community and private partners to develop ten large-scale, catalytic housing and retail projects that brought $90 million of investment in Cleveland neighborhoods. These projects included the construction of the Lee-Harvard and Arbor Park Place shopping centers, the redevelopment of the historic Fries & Schuele Block into condominiums and apartments, and the building of Dave’s Supermarkets stores in Cleveland’s Ohio City and Slavic Village neighborhoods. In total the projects helped enliven urban areas with more than 275 housing units and 330,000 square feet of retail space.

Mr. Berusch previously served as director of real estate planning at The Cafaro Company, a Youngstown-based shopping center developer. He also has been a consultant at Laventhol & Horwath, a national accounting and consulting firm, and executive director of Edgewater Development Corporation, a community development organization in Chicago.